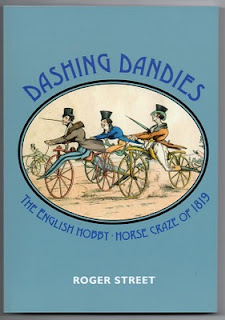 Or buy the book by sending a cheque or transfering money.

The detailed story of the forerunner of the pedal bicycle was first told in the author's well received book 'The Pedestrian Hobby-Horse' published in 1998. Much additional material has been discovered since then, and 'Dashing Dandies' is the result of this.

The story of 'Dashing Dandies' tells of the wooden 'hobby-horse' velocipede which was propelled by pushing with the feet on the ground. An enterprising London coachmaker Denis Johnson obtained a patent, and in 1819 made hundreds of machines in his workshop in Long Acre. The craze was largely led by the fashionable young men of the day known as 'dandies', hence this book's title. But for a while the machine "obtained a very general footing throughout the country".

A foreword to the book has been provided by Prof. Dr. Hans-Erhard Lessing, the eminent biographer of the original German inventor of the machine, Karl von Drais.

An appendix to the book, John Fairburn's 'New Pedestrian Carriage', was first published in the early part of the year 1819, and contains an amusing account of the London scene at the time.

'Dashing Dandies' has 220 pages, over 100 mostly colour illustrations and a comprehensive index. The first 100 copies only will constitute a Special Limited Edition, and will contain an illustrated, numbered and dated certificate giving the name of the book owner, signed by the author.

Dashing Dandies can also be purchased from Amazon.co.uk.